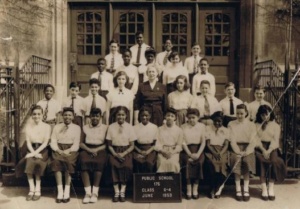 6th Grade Class Photo 1954 – Growing Up in Brownsville, Brooklyn,
NYC at that time Integration hadn’t been and Wasn’t A Disruptive School Issue. 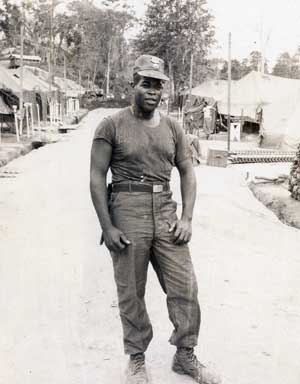 Emmett (aka: Emmett Thaddeus Doe, Jr.), was born in Harlem New York, Sept 27, 1941. He grew-up in Brownsville Brooklyn, New York and celebrated his 13th birthday in Munich, Germany. He quit school at the age of 16, yet continues his varied interest and has followed his curiosities to the present. In 1965, Emmett was drafted into the Army [as a Conscientious Objector]. His three years of service in the United States Army includes serving as a combat paramedic in Vietnam and subsequently receiving a Purple Heart. Shortly after returning to the States he found himself in the presence of Dr. Martin Luther King Jr. and heard him deliver a seldom played address before the National Association of Black Television and Radio Announcers Association, at their Annual Convention in Atlanta, Georgia. Emmett, liked Atlanta, and remained serving out what was a stormy six months that included a Summery Court Martial, that was reported on the National News Report by Chet Huntley and David Brinkley. He was acquitted of all charges and received his Official Discharge, Under Honorable Conditions. 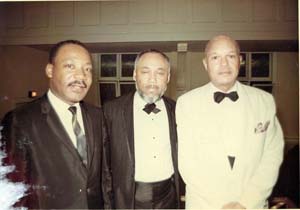 Upon his release from the Army he was immediately employed in the [to die-for] position, of a Union Organizer Trainee position with Region-Six Department of Organization of the AFL-CIO under the Presidency of George Meany. He went from his Army pay of $475.00 a month, to $175 x 2 wks. with expense account, over-night. Upon completion of a 6 month training and probationary period the position paid $275 x2 wks. with an expense account and new leased staff car with gas credit card. Doe served two six month probations (the only case known) and was fired nearing his 16th month of employment. The straw that broke the back of the AFL-CIO tolerance, despite a high job performance, was when Doe counter-attacked Civil Rights legend, Mr. Bayard Rustin of the A. Phillip Randolph Institute. Mr. Rustin (a known homosexual) made the mistake of castigating Black Manhood specifically and the Black Community in General for failing to throng behind the candidacy of Hubert H. Humphrey’s 1968 Presidential Campaign that was faltering. At a COPE meeting for local and National Black Labor (male) “Get Out The Vote” Leadership Campaign [he was ordered to attend] in Atlanta Georgia, Doe was dismissed, 24 hours later. Atlanta’s Black community was on the move…and so was Emmett Doe. 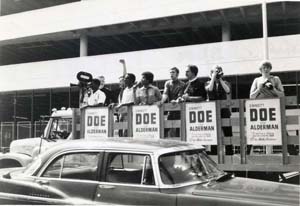 Doe knows, or has known Congressman John Conyers. Been photographed standing next to the notoriously rude Bill Cosby. In 1967 he shared an innocent evening enjoying live entertainment and the mellow vocals of the late Walter Jackson, with Congresswomen Yvonne Braithwaite Burk. He enjoyed a unique friendship with Maynard Jackson, till a few months before his so called heart attack. He’s known Congressman John Lewis, Julian Bond, Bill McKinney (father of freedom fighter, Congresswoman Cynthia McKinney) worked for AFSCME’s William “Bill” Lucy, as an organizer, in Chapel Hill where he met with City Manager Bill Britt, who in a few years became one of the top producers and leaders in the world of AMWAY (founded by Jay Van Andel and Richard DeVos). He got to know John H. Winters of Realigh, NC (the first Black City Council Person and multimillionaire State Senator). Doe, worked briefly for Congressman Ron Paul, Doe has served as Special Consultant to the Candidate and then president of Local 260 of the Transport Workers Union President the late Davis Carrington. He worked with the leaders of the Black Long-ShoreMen Union, in Houston Texas; and with “Operation Breadbasket” Plura Marshell. Civic, Community political, labor and business leaders for more then thirty years. Emmett Doe has an unusually diverse background that has allowed him to meet and work with people on a worldwide basis. In 1969, he was a candidate for the Atlanta City Board of Aldermen. 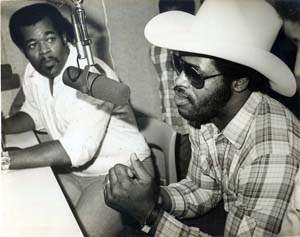 In 1971, Emmett was invited to host a radio talk show on WRNG AM Radio; and since, has hosted other live talk shows at several stations in the Houston Market. He served as News and Public Affairs Director, at Texas Southern University’s KTSU FM. In recent years he hosted and produced Live Talk Shows on KFCC AM, KYOK AM, and KPFT 90.1. His Really Quitting america commentaries debuted on WBAI Pacifica Radio, in New York City. Emmett Abati Doe, as he is also known tackles difficult subjects and issues, such as: The Atlanta Child Murders, frame-up of Wayne Williams, Western Imperialism, Male Bashing, The Aids Hoxie, Infant Circumcision, and the Miss-Education of the ‘people made in america’. Since, the 1970’s his commentaries have appeared in print, in a number of publications. 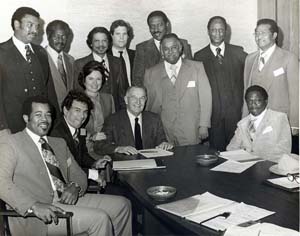 In late 1979’s Emmett Doe, became a member of the Black Republican Men’s Club and the club met with The Governor of Texas William Perry “Bill” Clements, Jr. He researched and authored the 1979 Doe and Associates, “Metropolitan Transit Authority Community Impact Report (Houston)”, an examination of the potential impact of what became METRO on Inner City Residents. The report was commissioned by Mario Silver, Executive Director of The Gulf Coast Community Services Association (the only study today done and paid for by the people affected the most by Public Transportation: Black Communities). 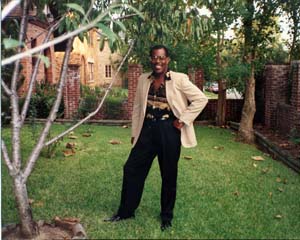 He is the creator and author of The 1992 “Community Economic Development Plan”, a solution to the economic dilemma of the Afro-american Community of 1993. He and Ben Thomas PhD, a Board Certified Pathologist Toxicologist, have worked together on various business development projects for over 16 years. Abati, for a number of decades has worked with inventors and helped them market their inventions and seek funding and development resources. In 2003, Abati became President of Trinity Water Oil and Gas, Company, and in 2003, he became Vice President of Renova Water Processes, LLC, and in 2004 He founded Stork Reality, LLC, and in 2006 developed and founded OnePainFreeSolution.biz. He has been involved with efforts to lift Russian D-2 for China Refineries and Nigerian Bonny-Light. He counts as a close acquaintance Mr. Qunicy Aboagye Sintim, the owner and operator of the only Off-Shore Producing Wells in Ghana. Mr. Aboagye is CEO of Houston Based Lushan Oil Company and Saltpond Offshore Producing Company Ltd. In 2004 Abati traveled to Accra with Mr. Aboagye, and conducted a Deepwater Rig Photo Shot. 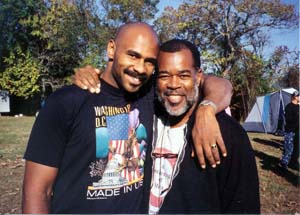 He is a divorced father of four, grandfather of four, mentor to young boys and a number of grown men and women. Abati Akinlana (aka: Emmett Abati Doe) was past president and co-founder of The Men’s Council of the Houston Area (an organization for men, that had up to 900 European/ male professionals and upper middle-class men). He is an Initiated-Man, with a New Warrior graduation date of 2/92. He is credited with co-founding AAFANTE African Americans Forming A New Tribal Existence “Inward Journey African American Council Underground Railroad Training Odyssey Experience” based in Memphis, Tennessee. He counts among the men he respects Robert Bly, Michael Mead, Dr. James Hillman, John Hendricks Clark, PhD., the late Amos Wilson, PhD., Morris Taggart, PhD, Dr. J. Dennis Jackson – his personal teacher and freedom fighter (and the author of The Black Commandos). His attorney, O. J. Lawal is a friend and leader of Nigerian Businessmen, and Entrepreneurs. Lastly, his most trusted, proven and tried friend is Ben Thomas. His cutting edge, insightful and visionary, commentaries and videos can be experienced at OnTheRealSide.com and on YouTube. Numerous important statements and documents from Emmett, can be found on his MySpace as well.

On Oct 14, 2007 Emmett Abati Doe was granted permission to submit a Petition/Application for “Political Asylum/ Safe Harbor” with the Bolivarian Republic of Venezuela on behalf of the people made in america, (pmia) on the grounds of the ongoing institutionalized and systematic U. S. Government-directed program of genocide against the descendants of those enslaved Prisoners of Wars they called “slaves”. Right-click here and “Save As” to download his 19 page application in PDF.